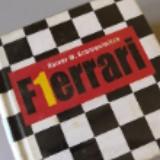 All items listed are my own well kept collections. Mostly still new and sealed. 🙏

The Ferrari F1-2000 was a Formula Oneracing car designed by Rory Byrne for the 2000 Formula One season. The car was a direct development of the F300 and F399from the previous two seasons, using the same basic gearbox and a new engine with a wider V-angle (90 degrees vs. 75 degrees in the 048 engine)

The Ferrari F2001 was a highly successful Formula One car, designed by Ross Brawnand Rory Byrne for the 2001 Formula One season. A revised version known as the F2001B was used in the first two races of 2002 before being replaced by the F2002 Hotwheels Ferrari F2001 F1 scale 1:24 Michael Schumacher.

The Ferrari F2002 was one of the most successful Formula One car designs of all time. Designed by Ross Brawn, Rory Byrneand Paolo Martinelli, it won fifteen Grands Prix, from a total of nineteen races in 2002 and 2003. Hotwheels 1:18 Ferrari F2002 F1 Michael Schumacher. Condition new and sealed. Pr

The Ferrari 248 F1 is a Formula One car, designed by Aldo Costa and Rory Byrne for the 2006 season. Hotwheels 1:18 Ferrari 248 F1 Michael Schumacher. Condition new and sealed. Price RM 500. Please PM if interested. Thanks

The Williams FW28 was the car with which the Williams team competed in the 2006Formula One season. The drivers were Mark Webber and rookie Nico Rosberg, the reigning GP2Series champion. Hotwheels F1 scale 1:18 Team Williams FW-28, Nico Rosberg. New with seal. Price RM 450. Please PM if interested.

The Ferrari F2005 is a Formula One racing cardesigned and built by Scuderia Ferrari for the 2005 Formula One World Championship Hotwheels F1 scale 1:18 Ferrari F2005 Rubens Barrichello. Condition New and sealed. Price RM 480.

The McLaren MP4-20 is a Formula One racing car that was built by McLaren. It was designed by Adrian Newey and Mike Coughlan, and introduced at the beginning of the 2005 Formula One season. The MP4-20 was the last McLaren car to be powered by Mercedes-Benz under the Ilmor partnership since the 1995 s

The Jaguar R2 was the car with which the Jaguar team competed in the 2001 Formula One season. It was driven by Eddie Irvine, who was in his second year with the team. Very rare Hotwheels F1 Jaguar Racing R2 Eddie Ervine. New and sealed. Price RM 380. Please PM if interested.

The Renault R25 was the Formula One car entered by Renault in the 2005 season. The car won both the Drivers' and Constructors' Championships in 2005, the first titles for any car racing with a French licence since the Matra MS80's triumph in 1969. Team driver Fernando Alonso ( 2005 champion for driv

The Williams FW23 was the car with which the Williams team competed in the 2001Formula One season. It was raced in competition by Ralf Schumacher, who was in his third year with the team, and Juan Pablo Montoya, a previous Formula 3000 and CARTchampion who was making his F1 début. Hotwheels BMW Wil

The Jordan EJ13 was the car with which the Jordan team competed in the 2003 Formula One season. The car was driven by Giancarlo Fisichella. The win came under extraordinary circumstances in the 2003 Brazilian Grand Prix which took place in torrential weather conditions. Following a massive accident

The Renault R23 is a Formula One car that competed in the 2003 Formula One season. The driver lineup were Jarno Trulli and Fernando Alonso who replaced Jenson Buttonwho left for British American Racing. The team started on pole at the 2003 Malaysian Grand Prix, thanks to Alonso. Later the team won